My road and its turnings 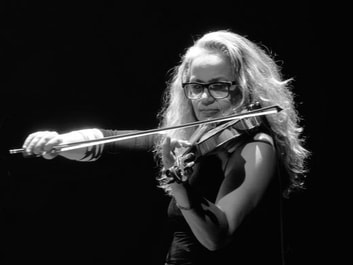 Kristin Molnar was born in Paris to a Hungarian mother and a gypsy father from a family of musicians for 5 generations. He initiated her to the violin when she was only four. She is a graduate of the Conservatoire  de Musique du Québec, the Franz Liszt Academy in Budapest, Laval University and l’Université du Québec à Montréal. She also participated in many masterclasses with, among others Pierre Amoyal, Yehudi Menuhin, Lorand Fenyves, David Cerone and Quatuor Orford.

At the beginning of her career, she worked with several chamber orchestras and symphonic orchestras in Quebec, and also as soloist and chamber musician in Quebec, France, Hungary and Japan.She now pursues an eclectic career.

Ms. Molnar has taught privately since the age of 18, and pursues a career as a teacher in public music schools in Montréal, such as the Des Cèdres school, the Marcel-Vaillancourt school, and for 14 years, at Joseph-François-Perrault Secondary School. In addition, she shared her knowledge in musical camps throughout Quebec

She has performed on more than thirty recordings by Quebecois artists such as Cœur de Pirate, Andrea Lindsay, Dan Boucher, Tricot Machine, Patrice Michaud and Yann Perreau, in addition to having collaborated as guest violinist for example for Pierre Lapointe at the Adisq gala or on tour with Star Academy 2009.

Her personal quest for her Roma origins led her to participate in various projects playing traditional music from Europe. She is one of the pioneers of that genre in Quebec, having played with the band Raoul – who won the “World Music” Félix Award in 1996 – as well as other iconic groups such as Ann Victor and Blues Gitan.
​
It is with Blues Gitan that she discovered Flamenco, which she embraced passionately. She has been part of the Montreal flamenco scene for over 10 years, as a musician ((Her debut was with the Flamenco Ballets Arte de España in the Azafran production), singer and occasionally as a dancer. She is actively involved in the organization of various events, including the « Cabaret Flamenco » for 7 years and, for the last five years, Festival Flamenco de Montréal.